The interactive dashboard can be found here.

Through the use of Freedom of Information Act requests (Request #: NRC-2019-000267)  and web scraping the Nuclear Regulatory Commission (NRC) website I put together a dashboard summarizing the fees collected by the NRC by its nuclear reactor licensees for fiscal years 2012-2018.

The NRC headquarters is right outside Washington D.C., in Maryland, with four regional offices (Pennsylvania, Georgia, Illinois and Texas) overseeing the nuclear power plants in its region.  For 2018 the NRC collected over $99M in inspection fees from 104 reactors with Region I collecting a majority of the fees (27.8%) followed by Regions II, III and IV, respectively.

The current dashboard only models the inspection costs collected from nuclear power plants (operating and decommissioned).  The data from material licensees, uranium enrichment facilities and others such as Honeywell, General Electric, NASA, etc. are not included. You can download the data provided to me as a result of my FOIA request from my github page.

The leading site in Region I contributing to hourly inspection costs was the Pilgrim 1 nuclear power plant located in Plymouth, Massachusetts.

The NRC measures nuclear power plant performance using the “Action Matrix”. It is a table consisting of five columns and each plant is ranked based on inspections and performance indicators. The further across a table a plant is ranked the more inspections and scrutiny they will receive from the NRC. Thus, more billable inspection hours. In 2018, the Pilgrim 1 nuclear power plant was in Column IV resulting in supplemental inspections from the NRC totaling $2,958,737 in inspection costs from the site. Pilgrim was also in Column IV for 2017 and paid $5.580,418.36 in NRC hourly inspection costs.  Pilgrim permanently shut down on May 31, 2019.

In reviewing the data there are several instances at dual unit sites where there is a large discrepancy in the annual NRC billing between the units. Just to name a few, here are some examples for FY2018, 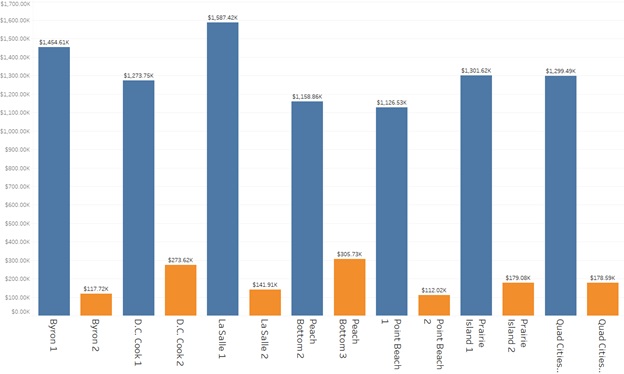 Unless there is some kind of particular circumstance for the large difference in inspection costs for multiple unit site, the discrepancy is likely due to NRC inspectors using one charge code the same inspection for the units at the same site and/or the utility preferring such. Either way it is more accurate to combine the fees for each site and take an average. Other dual unit sites have a more evenly distributed annual cost per unit (i.e., Salem 1&2, Diablo Canon 1&2, North Anna 1&2, etc.)